On one hand, Philomena is one of the most unlikely buddy comedies you’re likely to see, but to label it so might seem a tad too flippant. Director Stephen Frears (The Queen) does pit the dry British humour of Steve Coogan with a doddery, against-type Judi Dench, to great and unexpected comedic effect. But more importantly, the film is a harrowing true story about how a single mother spent 50 years shamefully and silently mourning over her son who was wrongfully taken from her.

Arguably the most quotable film of all time, Anchorman is the only film that I could recite word for word, backwards and in Spanish. Now after 9 long years of industry speculation and fanboy clamouring, I’m proud to announce that everyone’s favourite man-child journalist, with his killer moustache and Monty Python-esque antics has returned to the silver screen with his salon-quality hair mostly in tact.

With Don Jon, Joseph Gordon-Levitt proves once again that the boy wonder can simply do no wrong in his technically and stylishly outstanding directorial debut. Casting himself against type, Gordon-Levitt clearly revels in the opportunity to play the good looking, Jersey Shore-styled douchebag who would much prefer to seek his sexual gratification through hardcore cyber means than with real life flesh and blood.

Jeremy Sauliner’s Blue Ruin is a clever, taut and tense low-budget revenge thriller made with the same love for small-town noir pieces as the Coen Bros of old. A little know Kickstarter project with plenty to say about violence and its lasting impact on those unfortunate enough to experience it, Blue Ruin is an absolute gem of a film in its truest sense and demands your immediate viewership. 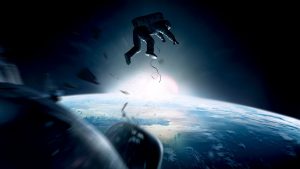 It has been seven long years since respected Mexican auteur Alfonso Cuaron’s Children of Men left me speechless. The dystopic and cautionary thriller about life without fertility showcased the exhilarative strengths of a very gifted director.  With Gravity, Cuaron transcends the usual conventions of viewing cinema and transports audiences as close as he can to a majestic, yet terrifyingly realistic final frontier. Adopting 3D technology flawlessly and to its fullest extent, Cuaron orchestrates an intense and claustrophobic thrill ride that will throttle and spellbind spectators into breathless submission.

Devastated by the sudden and catastrophic collapse of her high-flying, upper-class lifestyle and marriage, Jasmine (Cate Blanchett) flees the skyscrapers of New York for the quaintness of San Francisco. Intentionally modernising the theatrical characters and themes of Tennessee Williams’ A Streetcar Named Desire and grounding these in the wake of a post-GFC America, Woody Allen’s latest dramedy is yet another funny and unforgettable entry into his peculiar and notable catalogue.

Told through the eyes of an adorable and perceptive little girl, What Maisie Knew is a beautiful, yet deeply upsetting insight into the devastation of divorce and self-absorbed parenting. Directed by Scott McGehee and David Siegel (The Deep End, Bee Season) the film is a modernised reimagining of the 19th-century novel by Henry James of the same name.

Fans of director Edgar Wright’s genre-mashing brilliance can rest assured that The World’s End is more than just a fitting conclusion to his self-titled Cornetto trilogy. Though not as flawless as I view Shaun of the Dead and Hot Fuzz to be, Wright’s latest homage to the blending of cinematic conventions is by far one of the most zany and infectiously entertaining films of the year. Surprisingly (and thankfully), it also holds far more emotional resonance than you’d expect from a film of its type too.

How audiences receive Sophia Coppola’s satirical The Bling Ring, would vary largely on their tolerance levels towards the idolisation of celebrity culture and the sheer vapidness of those who worship it. While the hollow falsity of the Hollywood lifestyle repels me to no end, I found Coppola’s retelling of the baffling true events that inspired The Bling Ring to be maddeningly compelling, frustratingly entertaining and quite humorous as well.

At a time when Hollywood unleashes endless hordes of loud, fiercely rendered action blockbusters, it would be far too easy for films like The Way Way Back to float by completely unnoticed. Much like the plight of the film’s lead character Duncan (Liam James), the smaller, gentler, quieter films are almost completely engulfed by their domineering big-budgeted brethren. The Way Way Back however, offers audiences a much-needed reprieve from the epic intensity of the summer season and rewards viewers with a film that is veiled with sincere authenticity and honesty.