December 15, 2015
Shayne Travis Grieve
2015, Review
No Comments
“One step. One punch. One round at a time.” Pardon the deliberate pun usage here, but Creed absolutely rocks! The…
Read More

July 8, 2015
Shayne Travis Grieve
2015, Review
No Comments
Inside Out is everything you’ve heard it is and so much more. Inventive, stunningly-animated, ambitious, imaginative and beautifully heartfelt, the…
Read More

May 14, 2015
Shayne Travis Grieve
2015, Review
No Comments
Much like the film’s nitrous-fuelled death cars, Mad Max: Fury Road stomps furiously on the accelerator from the moment the…
Read More

Where the first Avengers film was a celebration of the long-awaited banding of superhero brothers, Avengers: Age of Ultron is about the escalating consequences and ramifications of such a grouping. Tasked with an impossible mission to appease fan’s lofty expectations, writer/director Joss Whedon has thrown every part of his being into providing audiences with the next epic, entertaining and thrilling chapter of the Marvel cinematic universe. And for the most part, he delivers.

Paul Thomas Anderson’s Inherent Vice is a cinematic oxymoron. Anderson, a celebrated American auteur, has dropped his darkly brilliant sensibilities and opted to concoct a stoner/noir/spoof movie. He’s traded in metaphorical milkshake-drinking for weed-smoking slapstick. The results are gloriously muddled, yet ultimately make for some wickedly pungent and hysterical viewing.

Violence doesn’t always equate to witnessing brutal acts of force and savagery on our screens. Emotional and internal violence of the spirit can be far more damaging and destructive if it’s allowed to fester and burrow its roots deep within a person’s soul.

If you like your suave British spy thrillers bloodier, bolder and totally unencumbered by standard studio regulations and guidelines, then Kingsman: The Secret Service is the 007 movie James Bond wishes he could appear in. 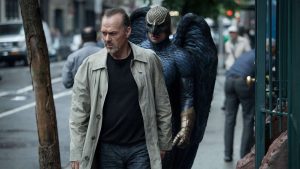 “A thing is a thing, not what is said of that thing.”

This quote (seen in the opening scene on the dressing room mirror) is the perfect counter argument to any criticism for or against the film. Birdman defies genre categorising and labelling because the film is intent on being exactly what it is. Sure the film is a unique, darkly funny and feverishly theatrical exploration of a man’s ego and his quest for validation and meaning, but it’s also a visual slice of cinematic ballet. You could scrutinise and evaluate every inch of the script, or you could lose yourself in the technical mastery of its camera work. You can’t go wrong either way.