World War I doesn’t have the same prevalence in popular culture that World War II does. For every All Quiet On the Western Front and Gallipoli, there’s Saving Private Ryan, Dunkirk and Schindler’s List. Even popular culture’s recent focus on WWI in Wonder Woman is matched by Inglorious Basterds, or the recent (and quite wonderful) Jojo Rabbit. This isn’t wholly a surprise – WWI didn’t paint America in the best light in comparison to their involvement in WWII against the Nazis. The idea of a war of attrition makes for less bombast and spectacle in comparison to that of a dramatized Blitzkrieg. Knowing that, it’s easy to understand why Hollywood reserves explorations into the Great War for prestige projects. 1917 is one of these prestige releases.

A film that isn’t a documentary set in WWI piqued my interest. This only grew once I realized Roger Deakins (Blade Runner 2049) was taking on the role of cinematographer, and had Sam Mendes (Skyfall) in the director’s chair.

1917 follows two British soldiers tasked with delivering a message across No-Man’s-Land and into German territory. Schofield (George MacKay) and Blake (Dean-Charles Chapman) carry with them information that would save the lives of 1600 soldiers walking into a German trap at the Hindenburg Line under Operation Alberich. The story is lean, and the pacing fast. The film needs little exposition as it barrels forward.

Sam Mendes is in fine form here – he gets good performances from the wide stable of notable actors. Mark Strong, Colin Firth and Benedict Cumberbatch all chew the scenery whilst on screen. As compelling as the tense, tight story is though – the star of the film is the cinematography. Roger Deakins commands every frame. He creates tension in wide open spaces, pulling in for claustrophobic shots of the actor’s faces and placing well planned hidden cuts to further the film’s single shot effect. The hidden edit technique is by no means new – Hitchcock famously used it in his 1948 film Rope. In 1917 however, the camera allows the viewer to step more fully inside the story as a silent observer. The continuous take performs a kind of dance around the actors, passing in front, catching up behind.

Far from a simple gimmick, the choreographed movements of the camera allow for some truly harrowing shots. These might not have had the same impact with a traditionally edited scene. Notable instances include a plane slowly falling out of the sky following a dogfight to crash into the foreground, and a soldier’s frenzied dash across a mortar strewn battlefield to reach British command. I do wonder (however foolishly) if a tasteful implementation of a 3D conversion would serve to heighten the experience. A ridiculous notion to be sure and I’m sure I’m in a minority on that one. However, I can’t help but imagine how much more immersive this form of storytelling and shot construction would be using a tasteful implementation of the much maligned 3D format.

If I were to give advice to someone seeing this film – surrender to it. Don’t try to gamify it and look for the hidden cuts in each shot like a hidden Mickey at Disneyland. Instead, allow it to take you on a harrowing personal journey through a dangerous active battlefield filled with tension, unease and danger. 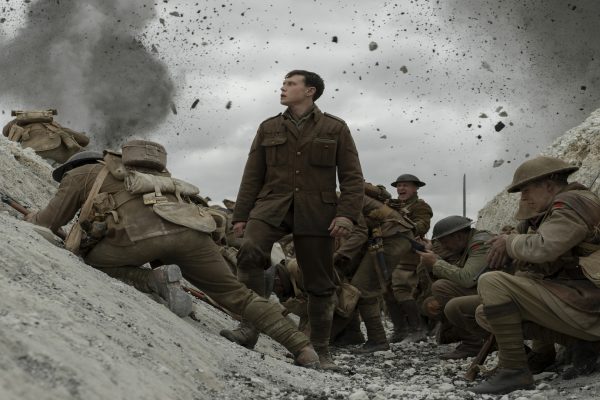