An effective, though questionably CGI’d movie monster and a welcome sense of atmosphere help The Offering from entirely falling victim to demonology-centred horror fatigue.

Not unlike fellow Jewish folklored entrant The Vigil, The Offering leans in on its religious thematics, but plays with them in an exaggerated fashion that keeps this indie horror flick teetering on the edge of mainstream thrills. Like all good horror films there’s a family dynamic at the centre of Oliver Park’s offering, with Art (Nick Blood, great name!) and his very pregnant wife, Claire (Emm Wiseman) visiting Art’s father, Saul (Allan Corduner), for a reason that Art is keeping to himself.

Lovely Claire, meeting Saul for the first time, is entirely unaware that Art is hoping daddy dearest will sign over his home and business – a funeral home – so that Art can crawl his way out of serious debt. If that wasn’t enough of a potentially uncomfortable situation to deal with, a fresh corpse has been delivered to their morgue, one of a man who has killed himself in a failed ritual attempt. There’s a dagger stuck in his body, an ancient amulet around his neck, and a contained demon just waiting to get out. Wanna bet shit’s about to get super demonic?

Where The Offering opts to travel across its brisk 93 minutes should really come as no surprise to any horror viewer – casual or seasoned – with ancient lore, a shapeshifter, and a creepy ghost girl all throwing their weight around a film that doesn’t add anything new to the genre, but has such a frenetic energy that it means you don’t have enough time to reflect on such. Art and Claire’s relationship is tested, as is Art’s with his father, all the while repetitive nightmare sequences and various rituals take place, resulting in an over-done though sporadically effective genre piece that culminates in a rather bleak pay off that at least sends the film off on a semi-memorable note.

2022 has arguably been the year of horror films – and smart, subversive ones at that – so it’s easy to dismiss The Offering as a more basic production. Whilst it presents itself as something a little deeper with its religious undertones, it submits to cheap thrills which, though disappointing when looking at the genre possibilities, at least means it entertains on a surface level; and, admittedly, it chalked up a few good scares that earn it some extra points for effectiveness along the way.

The Offering is screening as part of this year’s Beyond Fest, running between September 27th and October 23rd across various locations in Los Angeles. 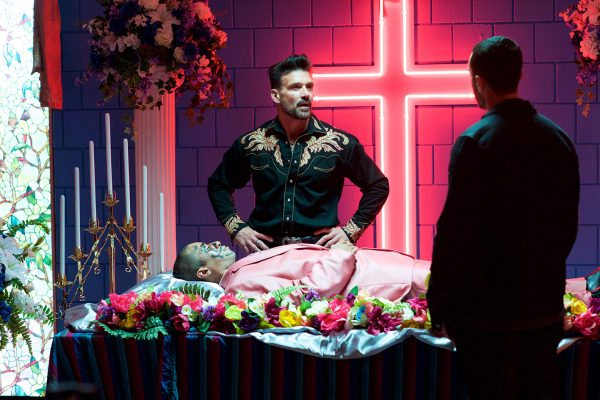