There’s a mood adhered to throughout Death Trip that lends the film a discomforting feeling which leans into the notion that very bad things are about to happen. With a title like Death Trip we ultimately shouldn’t be too surprised, and the decision to make the majority of the characters not overly likeable means there’s somewhat of a gleefulness to the knowing that these characters are going to meet their end in some manner. It’s just a shame that it takes far too long to get anything done.

A film that feels very much like a homemade project (which isn’t necessarily a criticism, as it adds a layer of uncomfortable, near voyeurism to proceedings) Death Trip centres around a group of friends – Kelly (Kelly Kay), Tatyana (Tatyana Olal), Melina (Melina Trimarchi), and Garrett (Garrett Johnson) – who agree to a weekend away at Garrett’s family’s cottage. The script from Kay and director James Watts feels very loose, and the fact that each actor plays a character with their own name means the banter feels rather organic, an additive that assists the film in its early stages.

The first sign of there being something sinister at bay is the mention of the next door neighbour, with Garrett suggesting that this particular girl (Zoe Slobodzian, who also worked in the film’s costume and wardrobe department) is living under the roof of a murderous father; the rumours around town are that he killed his wife. In between drinking games and various other substance uses, it adds up to little more than just an interesting, if slightly unsettling anecdote, and the crew don’t really think about it too much beyond their initial hearing of the supposed story.

As we start to get a feel of group dynamics and relationships, Death Trip slowly starts to drop flashes of imagery that tease the film’s final act, which, if what we briefly see is anything to go by, will be a bloody, brutal affair. It’s an interesting narrative choice, and it certainly ups the intrigue, but as much as the film has an air of tension about it, too many middling scenes of dialogue – and one overly long party sequence – stifle its flow, resulting in quite a taxing experience that constantly feels like it will never deliver on the promise it consistently teases throughout.

The disorienting editing starts to make sense once Kelly, Tatyana, Melina, and Garrett start to fall victim to whoever is wreaking havoc on their weekend plans, and the final face-off between revealed killer and last victim standing takes place on the surface of a frozen lake, complete with wooden mallets and a random guy driving an ice-mobile that is equally as tense as it is baffling seeing as how he doesn’t seem to take note of the literal fight to the death taking place mere feet away.

A little story exorcising and, perhaps, some more rounded character archetypes could’ve really pushed Death Trip beyond its current personality. It’s a promising look at what can be achieved on a minuscule budget – and the film’s musical score is a chilling exercise in the winning effects of atmospheric subtlety – but an overindulgence sadly keeps this getaway from being as killer as it could be.

Death Trip is available now on Digital from Gravitas Ventures and Kamikaze Dogfight in North America. An Australian release is yet to be determined. 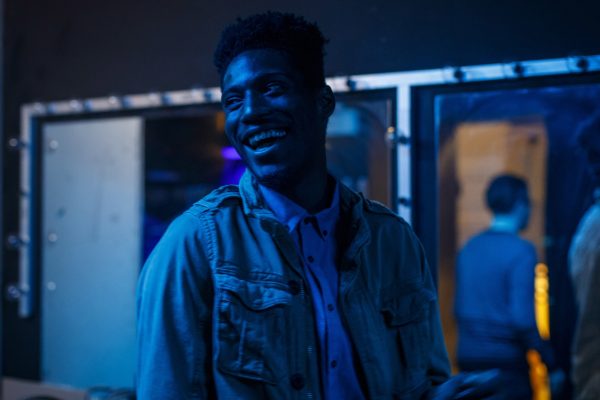