If you’re not aware, large cineplexes across Australia have begun installing 4DX cinemas, which purport to give you an enhanced cinematic sensory experience. With hydraulic chairs that move with the action and shove you gently in the back, sprays of mist and water, flashes of lightning, puffs of air and emissions of aromas, you are supposedly experiencing what the characters are. And of course, it’s in 3D.

It’s a huge gimmick of course. In times of threat to the industry, the movies have always done things like this, and they tell us that this is a better filmgoing experience. They use that buzz word, “immersive”. If I may diverge for a moment, the most immersive experience I had this year didn’t stimulate any senses other than the usual two, was in 2D and at a standard frame rate. Film, not digital. It was Once Upon a Time… in Hollywood, and it drew me into its world through good old-fashioned methods – production design, character and storytelling.

But I’m going to back off now from the “get off my lawn kids” and say that at Jumanji: The Next Level in 4DX, I had much fun. When the camera pans the seat tilts to the side. When it tracks or cranes it tilts forwards or backwards. When it goes handheld, the seat jiggles about. When the character gets splashed, so do we. You get the idea. It’s a theme park ride that totally works for a silly adventure movie. And only for a silly adventure, naturally, because if we’re watching something subtle, we really don’t need a robot chair telling us how to experience it. The night after this I watched The Farewell, and giggled as I imagined what 4DX would do with a quiet family drama with a frequently static camera and a lot of talking. Probably not worth the surcharge just for that one scene with rain in it.

As for Jumanji: the Next Level, it’s an entertaining little romp. You probably know the conceit – people in the real world play a game that takes them into a fantasy land complete with game-world dangers. They are given game avatars – the warrior (Dwayne Johnson), the zoologist (Kevin Hart), the dextrous female adventurer (Karen Gillan) , which makes for some funny juxtapositions, like putting a teen girl in a fat guy’s body. The game events are kinda fake but they have a limited number of lives before death is permanent, and this allows us to see hilarious deaths a few times before we need to get worried. In addition to the teens from the first film in the franchise (all unknown actors to me), newcomers to the game world are Danny DeVito and Danny Glover, so we can finally answer the question – what if DeVito had The Rock’s body? Also hilarious is an ageing Glover in the Kevin Hart avatar who is able to describe the nature of any hostile animal coming at them, but talks too slowly to get to the bit about how it can kill them.

The threats of monstrous jungle animals are treated with the right level of danger and comedy. It’s all tongue-in-cheek and not to be taken too seriously (which sentence should be The Rock’s middle name). Jack Black gets to make fun of his own physique (which should be Jack Black’s middle name). Karen Gillan is cool. In fact, all the actors inside the magical video game are really engaging, which make the bookends in the ‘real world’, with mostly uninteresting performances (the Dannys DeVito and Glover excepted) feel limp by comparison. It’s a disappointment when we escape the game to be with them.

It’s clever though, because between the Danny’s’ old-man problems (like hip surgeries and grudges), action heroes doing cool stunts and cracking wise, and hot teenagers falling in love, this setup is audaciously aiming at the perfect family movie. And it kinda works. Lightweight and frivolous fun, Jumanji: The Next Level is probably a great Boxing Day movie on whatever screen you want.

Jumanji: The Next Level is in cinemas Boxing Day.

Like Loading...
dwayne johnson, jack black, jumanji, jumanji the next level, Karen Gillan, kevin hart, once upon a time in hollywood, the farewell, The Rock 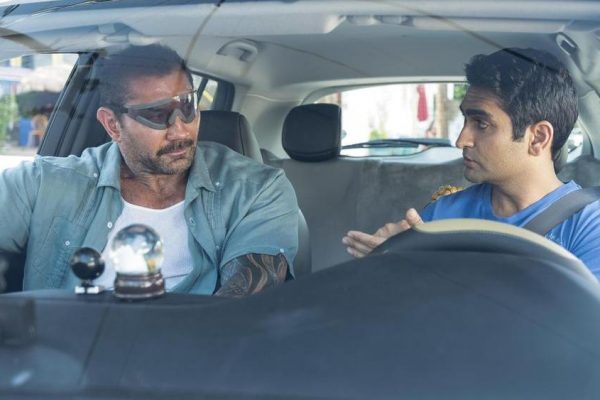