You have to hand it to writer/director Luke Sparke for having the type of grandiose-fuelled ambition to make a big budget-minded science fiction action film with the limited funds he was actually afforded. Somewhat of an Australian response to the American corner of outlandish adventure films that tend to come out of the Disney machine, 2018’s Occupation was a bombastic experiment in “what if?”. Whilst it didn’t exactly set the box office ablaze, it clearly earned enough of a positive response for Sparke to follow through on this sequel, one that leans into the usual sophomore trope of “aim higher”.

Aim higher he did. Whilst Occupation: Rainfall doesn’t always blend its special effects to a believable degree, one has to admire the ambition on hand and the admittance that had this just a little extra polish it wouldn’t be out of the realms of possibility for the Hollywood studio system to deliver something of similar quality. This is space opera at its most melodramatic. Quintessential Aussie cheese folded in with the evident influence of such genre efforts as Star Wars, Star Trek, Independence Day, and War of the Worlds, essentially meaning that Rainfall doesn’t forge its own identity, but at least is having a lot of fun in the process.

As much fun as it is having though, it’s not exercising an awful lot of subtlety. And at just over 2 hours it feels remarkably much longer, ultimately not delivering too much plot – all about those extended action sequences – and even having the nerve to end on a note that screams “we’ll be back” – assuming Sparke musters up the funds for a third time. But before it gets to such an end, it plays by the genre rules in serving up extraterrestrial life versus the surviving Australian population in an all out race war that pits the likes of a smarmy Daniel Gillies, a take charge Jet Tranter, and the bad boy charm of Dan Ewing against various alien creations (a mixture of practical and computer generated effects) in the fight for survival.

Whilst you’ll ultimately end up overloaded on shallow and distracting aesthetics – and I haven’t even mentioned the at-times cringeworthy addition of Ken Jeong and Jason Isaacs (or at least his voice) as a duo of American scientist-types who play fast and loose with the archetype of “comic relief” to no avail – Occupation: Rainfall should still be recognised for stretching the type of muscle it manages. An example of hard work and determination paying off, this may not be the most sophisticated instance of the genre but it deserves a hand for being lovingly created and rolled out in a similar manner to the larger, more expensive productions it affectionately nods itself to.

Occupation: Rainfall is screening in Australian cinemas from January 28th, 2021. 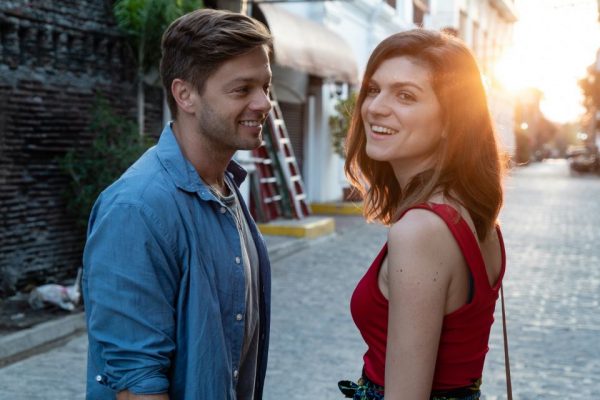