Just as his renowned fashion designer Reynolds Woodcock delights in hiding secrets in the lining of the garments he creates, writer/director Paul Thomas Anderson clearly takes twisted pleasure in masking the gothic menace that lurks inside his prestige picture.

Phantom Thread poses, with perfect posture, as a costume drama that explores (for the umpteenth time) the masculine genius and the muse who bequeaths to him, her heart. But the warped undergarments of the film invite keen cinephiles on a darker, more seductive affair; one that could prove too maddening for general audiences.

While the exceptional script consistently weaves enough wit and black humour to entertain those who may not enjoy long measurement-taking sequences or awkward breakfast standoffs, the final 20 minutes are bound to confound those who aren’t willing to take the leap.

This is very much a Paul Thomas Anderson film (see The Master, Boogie Nights, There Will Be Blood) and this time he’s here to reveal that hell hath no fury like a woman sewn.

Phantom Thread is every bit as illustrious and allusive as everything the filmmaker has previously delivered. A more subdued and naturalistic, Daniel Day-Lewis again proves his mythic-like status as the finest actor to ever appear on screen. Woodcock’s unquestionable genius comes at a price. He’s a petulant man-child who longs for his deceased mother’s warmth and comfort. We meet him at a time, when he discovers Alma (Vicky Krieps), a waitress turned model whose spell cannot be so easily shaken. Krieps does impressive work here, fearlessly playing coy around Day-Lewis’ toxic masculinity. Their romance and connection is beguiling. The perfectionist Woodcock, toys with the softly spoken Alma. Traditionalist storytellers would replicate the tired tropes of a woman being chewed up and spat out by her partner once her initial spark has waned, but not so here. Alma is slowly unveiled to be far more capable and resilient than her calm exterior suggests. Woodcock has met his match.

The feature thrives when dazing, almost hypnotically, at Woodcock’s sumptuous creations. Oddly enough, piercing needles through fine fabrics has never been more engaging. Thomas shoots much of the film in shallow close ups, focusing on breakfast utensils, pin pricks and romantic glances. When a wide shot is adopted, it’s usually to bask in the completion of yet another masterful garment or for the audience to appreciate the opulence and wealth on display. The production design’s attention to detail is scrumptious.

I’ve tiptoed around what makes this film truly special and so brilliantly twisted because a) it deserves far greater analysis from a more skilled writer, and b) you deserve a review that doesn’t spoil major plot threads. Let’s just say that I adore the title to this film.

Overall, Anderson can safely add Phantom Thread to his resume of masterful filmmaking and we can only hope that Daniel Day-Lewis lost a bet, and this whole retirement talk is nothing more than water cooler tomfoolery. 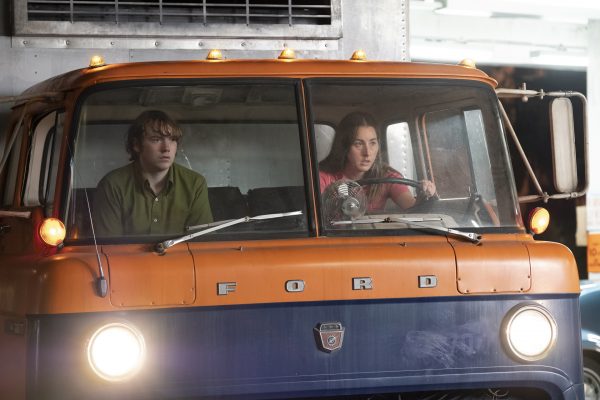