As Taron Egerton struts confidently towards the camera, in a campy, blood-orange feathered costume (complete with devil’s horns and oversized wings) no less, it’s evident from the get-go that Dexter Fletcher’s Elton John biopic Rocketman (so named after the singer’s 1972 single of the same name) is going to be one helluva entertaining show.

Whilst John’s own self-destruction off the back of being the man that has everything yet feeling so utterly broken and alone at his core is a path that many a biopic has travelled before – one only has to look at last year’s Bohemian Rhapsody for the tried and true formula (though Rocketman is infinitely better) – this life story retold via a jukebox musical temperament feels alarmingly more honest than most, which is somewhat ironic given how fantastical many of the sequences play out.

A musical number that feels ripped straight out of the stage cues of a broadway production kicks off Rocketman‘s 120 minute running time, taking us back to when Elton Hercules John was little more than Reginald Kenneth Dwight, a lonely little boy living in a relatively affection-free Middlesex house who could play a mean piano.  Whilst the near standard story trope expectation of childhood hardship is adhered to, the film very much operates under the umbrella that someone like Elton John deserves a biopic that’s a little more extra than your standard story, so Rocketman‘s choice to frame many a sequence to the standard of a traditional musical (i.e. cast members breaking into song at any given moment) is welcomed with open, and oft-flapping arms.

Of course, as much as you can fill a film to the brim with extravagance, in both a creative and a production capacity, the lead performance is still ultimately what it will rely on, and any shroud of poor imitation on their end can buckle the production, with no amount of flash able to disguise the fizzle.  Thankfully though, Rocketman excels beyond expectation.

From the moment Egerton swans into the film in the aforementioned devil get-up (crashing a rehab session for good measure), he’s wholeheartedly Elton John.  Whilst the Kingsman actor is far more attractive – even when he’s downplaying his own looks and adopting the thinning hair and oversized glasses synonymous with the pop star – he embraces Elton’s persona in such a manner that we believe every moment we witness; from the painfully introverted Reginald so desperate for his parents approval to the flamboyant rockstar who commanded the worldwide stage on a nightly basis.

Next to Egerton’s committed turn, it’s the use of Elton’s own back catalogue that stands as the film’s other triumphant ingredient.  So intricately weaved throughout Lee Hall’s script, it’s an impressive feat to note how expertly matched many of Elton’s songs are to the narrative moments on hand; perhaps most precious is the use of “Tiny Dancer”, which is sung as Elton, on the apex of stardom, wanders throughout a dreamlike party in 1970’s Los Angeles (the lyrics “Blue Jean baby, L.A. lady, seamstress for the band” feeling all-too perfect for its groovy setting).

Whilst the film isn’t without a few overly mawkish sentimentalities, and it often plays fast-and-loose with several aspects of his life (his marriage to female German recording engineer Renate Blauel is skimmed over within a minute of her character being introduced), it never fails to maintain its ferocious grip.  Much like Elton John himself, Rocketman is a poignant yet preposterous journey that’s equal parts campy and cordial, but never less than inherently entertaining. 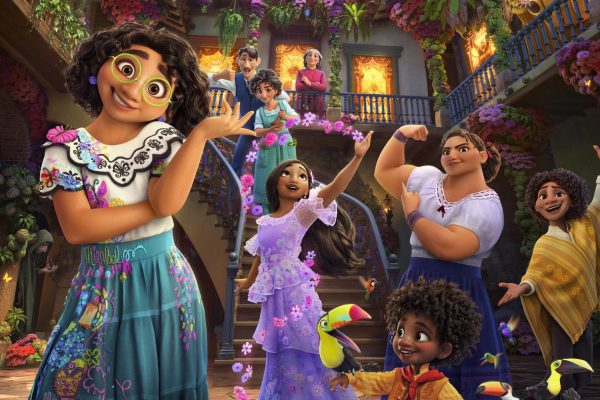