Concluding the saga that George Lucas so boldly forged some 40-years ago and serving as a continuation to the franchise’s most daring (and divisive) entry, The Last Jedi, Star Wars: The Rise of Skywalker arrives with a certain amount of pressure.  Rian Johnson (The Last Jedi‘s helmer) argued that bolder, more inventive ideas should be adhered to in telling stories, making the sane note that telling the same story over and over again creatively stifles whatever potential the series has.

Given that more of the same has returned platinum results for the Disney canon (for the most part), Johnson’s defiant stance went against everything the House of Mouse were known for, so it made sense (however disappointingly) that he would be looked over in favour of J.J. Abrams, a reliable genre filmmaker who forged The Force Awakens towards a $2 billion haul.  And whilst Abrams has proven himself within the Star Wars universe, here he panders so much to the fans that anything that should feel remotely heartfelt comes off as inauthentic service.

A convoluted first half immediately sets off warning bells that The Rise of Skywalker won’t be the Star Wars its fans deserve, with the Abrams/Chris Terrio-penned script essentially ignoring much of what Johnson and The Last Jedi put forward; almost as if the franchise has given in to the detractors that came so savagely for that film and apologised in the process, the on-screen time dedicated to resistance mechanic Rose Tico (Kelly Marie Tran, undoubtedly The Last Jedi‘s most controversial and attacked component) has been seriously reduced, despite Johnson’s previous efforts to suggest a continued relationship between her and stormtrooper-turned-resistance fighter Finn (John Boyega).

Speaking of Finn, his character hardly feels of much use throughout either, and as much as his chemistry with Oscar Isaac’s fighter-pilot Poe Cameron burns brighter than any other supposed bond the two share with their fellow players, the hope that Star Wars would give us a same-sex love story is shot down as quickly as one of the many spacecrafts that lose their flight pattern in the film’s standard action set-pieces; and of the subject of pandering, the briefest shot of a female resistance member locking lips with her (presumed) wife doesn’t count towards this series marking a moment of progression.

But what of the actual story? Well, dark Sith lord Palpatine (Ian McDiarmid, once again chewing the scenery like he hasn’t been fed in years) has returned, Kylo Ren (Adam Driver) wants to take him down whilst simultaneously hoping to track down Rey (Daisy Ridley) to convert her to the dark side, all the while she’s harnessing her Jedi powers to defeat the First Order.  It’s an expected storyline with only the most minor of surprising revelations, and though the push-pull temperament between Kylo and Rey results in a logical conclusion, Driver and Ridley at least elevate their material beyond its surprising simplicity.  Also working far more than it should is the largely-CGI rendering of Carrie Fisher as Leia, the late actress ironically delivering the film’s most heartfelt performance.

Though The Force Awakens paid fan service, the seeming gimmick of overt focus on re-emerging characters – Billy Dee Williams’ Lando Calrissian being a prime example – is one Abrams adheres to almost too often here, as if he’s afraid that audiences will tap out if the camera decides to take a breather.  There’s such frenzied, kinetic energy on board here that it’s almost insulting that it’s adopted to mask the fact that much of The Rise of Skywalker‘s first half is devoted to planet-hopping adventures that barely add anything of narrative weight to the proceedings.

As to be expected though, when the film aims for aesthetically-pleasing visuals it delivers accordingly, with a stormtrooper battle across the desert momentarily exciting, as well as arguably the piece de resistance of the film – a gorgeously rendered lightsaber battle between Kylo and Rey among tsunami-sized waves crashing violently around them.  As epic they are in proportion, emotionally they’re shallow, which could almost serves as the film’s mantra.

As a film on its own merits, The Rise of Skywalker is a passable action affair that never presents material that truly feels like its putting any of its players in legitimate peril.  It’s safe, and there’s nothing particularly wrong with that when being viewed as a standalone feature (however underwhelming it may be), but something like this can’t help but be compared to both the recent films that directly preceded it as well as serving as the ultimate culmination of a film series that started out so strong, temporarily retreated, before righting itself again with a duo of entrants that respectively tipped their hat to its fans with a coherent sense of fun and maintained a bold sense of self in its vision of storytelling, something this sadly has neither of. 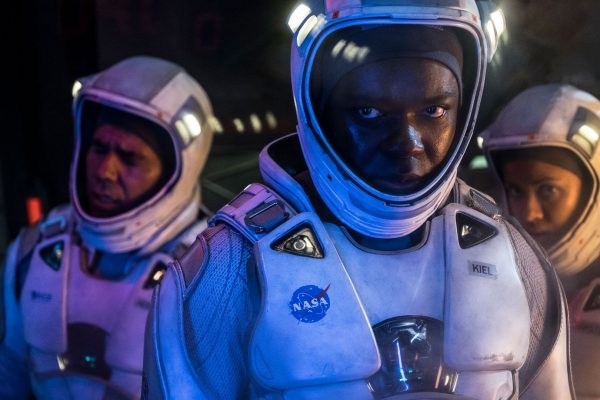