Leigh Whannell is a director who wears his love of genre cinema very much on his sleeve. From his early days of Saw to the grimy, cybernetic lunacy of Upgrade, Whannell has been channelling a kind of video store movie maker’s energy. But, with The Invisible Man, the Aussie talent very much comes into his own, showing a maturity and deft touch not really scene in his previous outings, proving that he is a force to be reckoned with while stressing the audience out for two hours.

Borrowing from H.G. Wells novel of the name in title only, The Invisible Man focuses on Cecilia  (Elisabeth Moss), a woman desperately trying to escape the clutches of her abusive partner, Adrian (Oliver Jackson-Cohen). Whannell shows off his talents early on in an expertly tense sequence of Cee escaping the clutches of her former lover with the help of her sister, Alice (Harriet Dyer). Two weeks later, and Cee’s living with her police detective friend (Aldis Hodge) and his daughter, Sydney (Storm Reid). Experiencing acute agoraphobia and PTSD, Cee is sent word that Adrian has killed himself, leaving over 5 million dollars of his estate to her. Believing that the nightmare is truly over, she begins to breathe easier, and starts the process of rebuilding her life. And that’s when the real nightmare begins.

While the budget for The Invisible Man is low, there is absolutely nothing cheap about it. Whannell demonstrates an incredibly assured hand as a filmmaker, relying far more on quiet moments, lingering cameras and fraught performances from his talent to really elevate the material. Where a lesser director would have opted for a boom-crash style of jump scare horror, Whannell goes in a completely opposite direction, building an atmosphere of complete dread through minimalism, forcing the hairs on your neck to stand on end and keep them that way until he says otherwise. Whannell, with the help of cinematographer Stefan Duscio, makes you terrified of empty spaces, vacant chairs and the silence of an empty house.

The true brilliance, though, of this film is both in the performances of Moss and the focus on abuse. In a time where the Australian public consciousness is scarred by the ongoing stream of horrific news regarding violence against women, Whannell latches on to that in a way that is both effective and non-exploitative. Moss is possibly the best she’s ever been, putting in a performance that will utterly fray your nerves, showing a woman who has lived a life of controlled horror, and is gaslit to the point of insanity. She continues to demonstrate that she’s arguably one of the strongest elements of anything she’s in , leaving nothing left in the tank of a performance.

As both writer and director, Whannell continues to prove that he is a breath of fresh air to genre cinema (and cinema in general). The Invisible Man is clearly a film made by someone not satisfied with working within convention, opting to subvert ideas and expectations with incredible maturity and subtlety. I left the cinema with a tightness in my chest and an anxiety that I haven’t felt from a film in a long time and it’s only now that I’ve caught my breath. 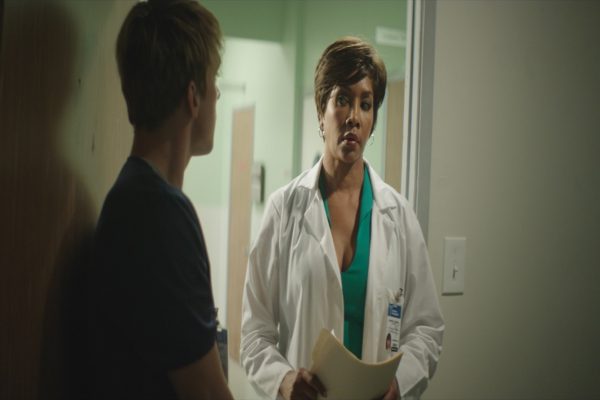