We’re no strangers to tragic teen romances at this point, but Words on Bathroom Walls – however generic its premise may seem – is a far more insightful product than I suspect many audiences will be expecting.

Said words on bathroom walls are specific to young Adam (Charlie Plummer), a high-school senior who has big dreams of attending culinary school in his desire to become a chef.  Finding solace in cooking after his dad walked out on him and his mother (Molly Parker), the future seems bright for the likeable Adam, that is until a school laboratory session mishap gets him expelled halfway through his year.

Just why this mishap took place is far more psychological, and it’s why he can see these certain “words” as he’s diagnosed with schizophrenia, a subject that all too often has been handled rather one dimensionally by Hollywood.  Portrayed as crazy and disconnected from the world, people who have schizophrenia can very much function in the real world, and it’s through director Thor Freudenthal’s unique visual flare that this illness is given a more understandable approach to the masses.

Adam’s schizophrenic episodes are detailed in such a way that allows an understanding as to what it must be like in the head of a young person living with such an ailment.  He sees things that aren’t there, and his inner consciousness is manifested in the form of a trio of imaginary figures who act as both a light and darkness as to how he should behave; Lobo Sebastian’s Bodyguard represents an air of both self defence and anger; AnnaSophia Robb (absolutely delightful) as Rebecca is a free-spirit who personifies his tenderness; and Devon Bostick’s Joaquin is symbolic of his hormonal tendencies.

Being diagnosed as schizophrenic doesn’t make Adam the most desirable student, so he’s transferred to a Catholic academy where he’s promised a clean slate by the seemingly understandable yet incredibly stern Sister Catherine (Beth Grant) – as long as he stays on his medication and his mental illness is kept under wraps.  Not wanting to draw attention to himself, Adam is reluctant to accept the advances of Maya (Taylor Russell), a hardworking, kindly souled student, but we’re unsurprised when he relents and a bond is quickly formed.

Whilst the Nick Naveda-penned script indulges in a few schmaltzy teen romance tropes, Words on Bathroom Walls always feels like a real film, commenting on ominous themes with a delicate balance as to not overwhelm its audience, whilst maintaining a respect for the diagnosis at hand; the humour present is never in a manner that feels exploitive.

It’s also of an immense benefit that such remarkable talent as Plummer and Russell are the ones navigating Naveda’s dialogue. His charming awkwardness and her diligent compassion play off each other so organically that you are immediately invested in their plights – both individually and collectively.  There’s age-appropriate dialogue being sputtered that helps the film also, and the story’s authenticity is elevated further by the fact that the parental figures (including Walton Goggins as Adam’s mother’s new beau) aren’t throwaway caricatures either; some of the film’s hardest-hitting moments are between Plummer and Goggins, with an emotional outcome I dare say will cause a few audience members to reach for their tissues.

There’s really no better way to destigmatize mental illness than by talking about it, and Words on Bathroom Walls is an entertaining form of starting an awkward conversation.  There’s enough sappiness to keep the film from being bogged down in an emotional weight – although it isn’t afraid to border on the heartbreaking dilemmas of the pros and cons of taking medication – but it consistently remains a respectful representation of how much support is possible for someone with schizophrenia, and that going through this life alone is never an option that should be considered.

Words on Bathroom Walls is screening in Australian cinemas now. 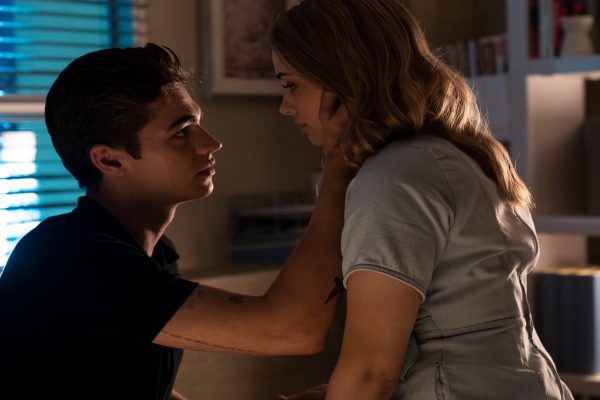